As I mentioned in another post, I finally broke down and spent the dough for a good Comp-Tac holster.

I've been carrying my P6 in a basic leather holster from JBP Holsters. The JBP is the same holster many of you saw Breda carry her pink-gripped Bersa .380 in at the Blog Bash. It actually works well for lighter guns like the Bersa, and I carry my FS22 in one with no issues at all.

Carrying a P6 or similarly sized pistol in a JBP holster is an entirely different story. I would call it "adequate" at best after four days of carrying in Phoenix. Most of my CCW around here consists of short trips to PA where I'm rarely carrying for more than a few hours, but Phoenix convinced me I needed a better holster.

Enter the MTAC. It's not cheap at ~$90, but my initial thought is that it's worth the money. I ordered mine with the standard clips and a holster body for my Sig P229R. It's immediately evident this is a quality product.

The stitching and leather are excellent and the leather backing is soft enough that even carrying without a tucked undershirt is not uncomfortable. That's certainly better than carrying all day with hard kydex against your skin. That's actually the primary reason I bought an MTAC over a CTAC. I don't have any "natural cushioning" around my midsection and thought kydex would probably dig into my sides all day.

Also worth mentioning is Comp-Tac's customer service. The holster came with an allen wrench for adjusting the tension screws, business cards, a hand-written "thank you" and smarties. They also had the holster to me in about 5 days, despite quoting me a 10+ day wait initially.

I can carry a fully loaded P229R and it is, dare I say, comfortable! I never thought I'd be able to conceal any of my Sigs, much less a double stack 229R under nothing more than a T-shirt.

I only have two complaints. One, when I first put it on without adjusting the retention screws I gave myself a huge wedgie trying to draw the gun. If you buy one adjust the tension before trying it out, unless you like wedgies. Two, (and this is a completely random, useless observation) the leather just plain smells bad.

Now, for some pictures. 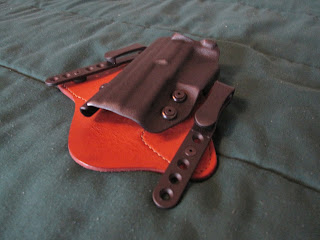 Wearing the smallest T-shirt I could find, a Gap Stretch T.
A darker color would conceal far more effectively as well. 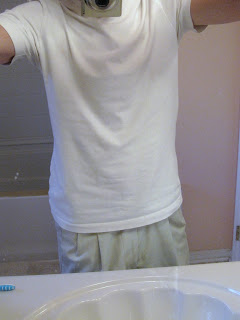 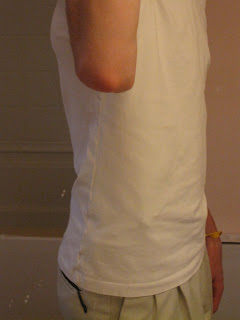 If I twist my torso enough it prints, but I am carrying a good sized gun on a thin frame. 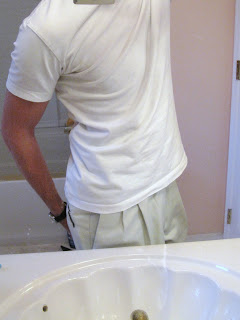 Nice review. how do you like carrying at 3 o' clock? lately I've been carrying at 11:30- I've very wide and the added width really sticks out when I try 3 o'clock- and 4-5 o'clock carry often leaves me exposed as my shirts tend to ride up (long torso, and shirts run funny in my size)

would this work for more 'front' carry? say between 11 and 1?

3:00 works fine, but I'm still experimenting to figure out what works best for me.

I find I have trouble with the butt printing when I carry at 4-5:00. That and reaching so far back bothers my screwy left shoulder.

It seems to work fine for "front" carry, though I haven'tried that anywhere but around the house. I always feel like it's not quite as stable on the belt carried up front, and draw is more awkward than at 3:00.

forgot to mention in my post that the cant of the holster body is adjustable, which really helps when concealing my double stacks.

WOW that really does carry well. Also you ain't kidding about the "No extra padding" (I have some extra around my midriff if you want I can mail it to you!)

Pretty good concealment rig. I'd say after a month of carry that leather won't smell like much unless you push your nose to it.

Thanks for the write-up, Mike. The pics help, too. I've heard nothing but good about this holster, lately Now I just have to lose 10-20 pounds so I can wear IWB... LOL!

damn, dude...knowing how thin you are, that's impressive.

I've used Comp-Tac holsters for years and I love them.

They have the best customer service I've seen anywhere.

It's amazing what one can conceal without anyone noticing.

With a good belt, you should be able to wear it all day with total comfort. And for $90, that's a steal. You get what you pay for with holsters, and when you buy a new one it will last a lifetime if you take care of it.

As for the extra cusion, you would be surprised at how much more room for concealment it gives. When I was skinny I used to conceal a Glock 20 all day every day with zero problems. Now with my new extended waist I can conceal a full sized Browning 1919A1 with no printing!

Great review. I just got mine. From looking at your photos I think I have a slightly larger upper body but a smaller waist. When I was experimenting last night the gun was most hidden just past 3:00. I also dropped the clips to their lowest position to get the gun as low as possible. Granted I have a full size XD, so a good size handle.

@mike's spot: with this holster drawing from 11-1 might be weird, its the wrong cant. They do make an appendix carry version.

I wrote a couple of notes about my m-tac on my blog.

I currently own a CTAC for a compact 9mm M&P and I love it. I have been carrying it at the 3 and kydex does not bother my skin. Just picked up a new glock 26 and I am thinking about the Mtac this time. I have a much larger build than you, should have no problems.

Anon -
I've tried kydex holsters and found that they dug into my hip/sides. I suspect I'd have no issues if not for my slim build.

I also liked that with the leather backing on the MTAC I could comfortably carry w/o a tucked undershirt.

Extreme Tolerance -
I agree on appendix carry, while doable the MTAC's not designed for it. I'm wary of appendix carry in general. Something about the muzzle of a loaded gun pointed at my nuts. Plus it doesn't seem like it'd be comfortable when sitting.

I'll be checking out your MTAC review as well.

Thanks to both of you for the comments. My apologies for not responding until now.

I love my MTAC so much that I recently ordered another when I got a different pistol. I drove from Knoxville to Myrtle Beach and back last year with it on and not a bit of discomfort (about 485 miles each way). A word of caution, however. My original holster is for a Beretta 92 (I have 2) and by last fall I noticed that the grip screws and lock washers on the inside were rusted. No rust on the frame. I replaced those screws and bought Rem Oil with rust protection and spray it on the screws every time I wear it. My latest weapon has a polymer grip so that shouldn't be an issue with it.