From a Occupy Delaware protest 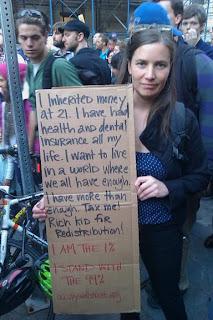 Here's the problem with folks like this.  They're NOT saying "I'm rich, tax me."  They're saying "I want my taxes raised, so raise them on me and on all those other folks too."  Then they act indignant when those "other folks" don't want their taxes raised.  This "rich kid for redistribution" is advocating for the redistribution of other peoples' incomes.
It's one thing to protest because you want the government to leave you the hell alone.  It's quite another to protest because you want the government to enforce your morals by force, take from those you've decided you don't like, and give you "free" shit.
I think NJT captures that perfectly here.
Posted by Mike W. at 10:32 AM

She inherited money at 21? Did she take all of it? Or did she donate the majority of it to charity? Did she take advantage of any tax loopholes that may have been set up in the estate? Or did she voluntarily pay additional taxes on what she received from someone else's hard work? Does she currently take advantage of deductions and write-offs on her annual income tax? Or does she intentionally over-pay?

I'm guessing she's a total hypocrite who gets off on being a trendy martyr for a cause that dovetails with her left wing politics.

I think both movements have a kernel of truth, and both movements are fundamentally wrong. To say that either business or government is totally wrong, while holding the other party blameless is to demonstrate a fundamental misunderstanding of the real problem.

Corporations and government are so intertwined as to make them nearly indistinguishable from one another.

For example, the Gramm Leach Bliley Act is what made the current mortgage mess and the subsequent crash possible. This act was bought and paid for by Citi Bank. Read it here:

That photo was distinctly not taken at the Delaware rally. Looks more like it was teken in NY...

Is she an aspiring actress?