....Ok, not really, since my car is anything but fast.  The word "fast" and front wheel drive, 4 cylinder cars do not belong in the same sentence, despite what boy racers in lawnmower-esque Honda Civic's might tell you.

If I had to sum this post up in one word it'd be "grip!"  I've had these Hankook RS-2's on the Mazda for a week now and I love them!  We'll see just how bad they are in the rain at some point....

I wasn't going for looks here, only function, but I'll admit I'm not a fan of the red lip on these wheels.  They were my 3rd choice, as I couldn't find a set of RX7 FD wheels anywhere that weren't beat to hell, and the wheels I wanted were perpetually "out of stock" everywhere in the size I needed.

I'm clearly odd, since most people don't drop down a size (from 17 to 16 inch wheels) for the summer.  I did.  16's are cheaper, the rubber is cheaper, and they weight quite a bit less.  Stock Mazda 6 wheels are ridiculously heavy, something like 26 pounds each.  While I haven't weighed these, I do know they're significantly lighter.

Lighter + lots of grip is exactly what I was going for, and you can't get much better grip than Hankook RS-2's unless you want to put R-compounds or track tires on the car you drive everyday.*  I expect these will stay on the car for about 5 months and I'll put roughly 6,000 miles on them this season.  If I can get 18-20,000 miles out of them I'll be happy.  These grip like crazy, and frankly I'm not insane enough to test their breaking point.

It's been hovering right around 50 degrees in the morning here in Northern DE lately, and when the tire packaging says "not for use in temperatures below 50 degrees"  Given what I've seen so far this week I think these would turn into rock hard ice skates in cold weather.

*I got the RS-2's on closeout for $67 each. They're now discontinued.  Every other comparable tire is twice as much.

This is somewhat off-topic, but when the shop pulled off the old wheels one of factory Michelin,'s which had just started mysteriously leaking air, had started cracking along the sidewall.  It still had plenty of tread, but the sidewall on the backside of the tire was badly cracked and starting to fall apart.  Glad I got them off the car when I did.

As for looks, if the red lip really starts to bother me enough I'll just paint over it. 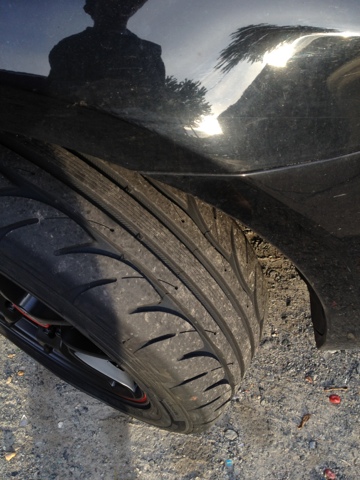 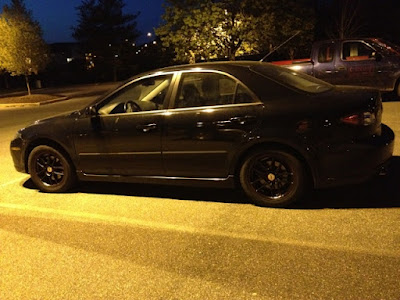 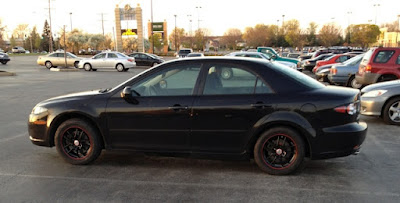 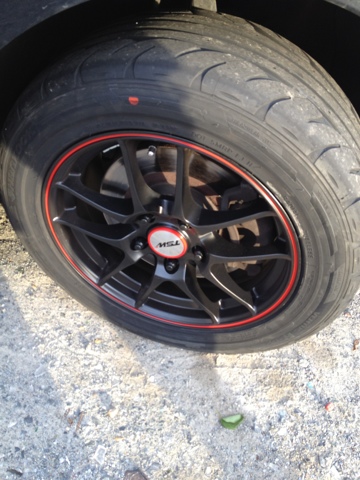 I recently put a set of Hankook Dynapro ATMs on my Ranger 4x4 and I couldn't be happier. They are great in the rain and snow and cost significantly less than comparable tires from more "name" brands.

Kudos to Hankook. They burst onto the scene a few years ago and they seem to make very good, reasonably-priced tires!

Oh, to pay $67 per corner for rubber. Full retail for shoes on the War Machine run in excess of $1000 for all 4. I can only hope to find a tire for as good a price and performance when I have to shoe the Volkswagen.

red lip on black wheels on a black car? not that bad, really. it breaks up the monotony of the black. :)