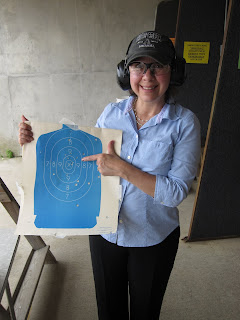 Mom has been interested in heading to the range with me for quite some time now, but we hadn't had the chance to go shooting till today. I asked her yesterday If she'd like to come and she was excited about going. We did a short lesson on the 4 rules, basic range rules at Ommelanden, and how I was going handle the range session.

I figure it's best to stick to the K.I.S.S. principle when bringing someone who's unfamiliar with guns to the range. If they're safe and they have fun then that's a successful trip. With that in mind I focused primarily on good muzzle control and keeping her finger off the trigger.

We got to the range and both the rifle and pistol range were full. Mom found the noise disconcerting even when we were in the parking lot, so I thought that might be an issue once we got onto the firing line. Once we'd double plugged mom acclimated to the noise and it wasn't an issue for the rest of the trip.

We signed in, showed ID (apparently they do that now) and once we put up targets I showed her how to load magazines, load the gun, check condition, etc. She was a bit nervous, but that disappeared once she saw me shoot the .22 Bersa and realized it didn't kick at all.

Once she put the 1st round down range turned to me with a huge smile (maintaining perfect muzzle discipline) and squeed. "I hit the target!" Soon she had her shots down and was able to put several rounds in the middle of the target. I wish I had a picture of mom's face when she hit the bullseye.

We did try the P6 and the P229 in .357SIG after moving back a bit and switching to a blue silouette target. After watching me take a few shots with the P229R and exclaiming "wow, that's really loud" Mom decided she had to try it out. My shots were low and right, and one high and right. (still jerking the trigger) Mom's 1st shot was dead center, a bit high on the 8 ring. She shot out the rest of the magazine with what she called "The big, loud gun" then stopped and started shooting the Bersa again.

I think I heard the words "This is FUN" at least 10 times. Then, on the ride home she asked "can the little gun be my gun?" Yep, you heard that right. Her gun.

Too bad dad had to be a grouch, make annoying jokes about whether she shot anyone, and just generally act annoyed and disgusted that I was taking mom to shoot guns. I did invite him, knowing he wouldn't want to go, just so he wouldn't feel left out. I'm actually glad he didn't accept, since I don't need to hand a gun to someone who's acting like a bratty little kid. 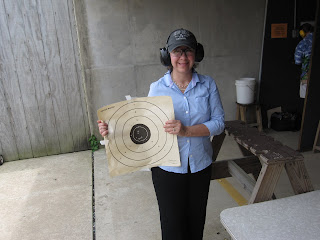 i seriously need to meet your mom and shake her hand. talk about a transition!


oh, and i'd like to take a wiffle ball bat to your dad's noggin for being a douchecanoe.

Dude, your mom is adorable! Go buy a gun for her!! They make a 10-round .17 HMR revolver, you know. Or at least, I know they exist. Not sure if they still make them anymore.

Great job! its gotta be tough with one parent so not in favor of guns and another willing to learn. Great work!

Great job and good times, Mike! This is why gun rights in America are winning, and Helmke, and Sugarmann et al are sad sad pandas.

I'm having similar problems with mine. He's essentially a copy/paste from Newsweek sort of guy, and then quickly changes the subject as soon as he relizes he doesn't have the whole story, but doesn't EVER want to concede an issue.

I should try and work harder with Mom....unlike you, I WON'T invite Dad : ]

I'm so proud of both of you! Great job, Mike...and welcome to the chicks with guns club, MomW!

Congratulations on getting your mother to the range, and double-congratulations for her enjoying it... Something tells me that her effusing over how much she enjoyed it might be punishment enough for your father... ;)

Yeah, now little sis #2 wants to go to the range too.

Little sis #1's boyfriend wants to go shooting, and a family friend is asking for advice about buying his 1st gun, so I will probably have to bring him to the range as well.

Good on ya, Mike!