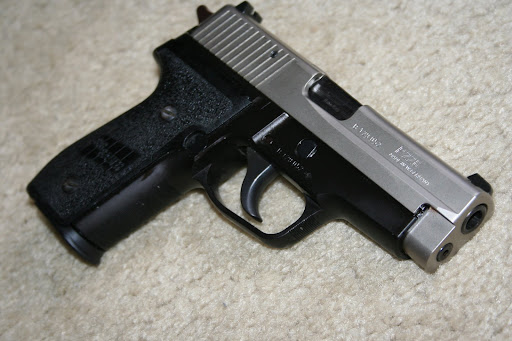 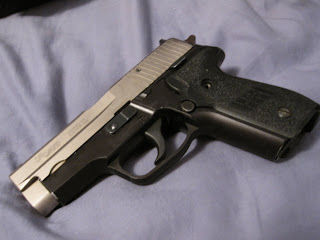 In keeping with something I said to Jay at the Convention, I'm putting one of my Sig P228's up for sale. (Remember Jay, this one was actually made IN Massachusetts.)
$475 + shipping OBO - post here or shoot me an e-mail if you're interested.
It is the CCR Ceraplated Sig Sauer P228 in the top two pictures here.
I'll post up more details when I get home. It's Double Action Only, 1991 manufacture, West German, 3 dot contrast sights. Two 13 rd. Sig magazines will also be included.

There is a small spot on the underside of the frame that looks like it was knawed a bit by a squirrel. This gun was a used police issue I bought from a pawn shop and my guess was the previous owner either dropped the gun or knocked it against a wall. (see 2nd picture)

There is some discoloration on the rear upper area of the slide, near the top of the slide serrations. If you're interested in the gun I have more pictures available upon request.
Posted by Mike W. at 12:59 PM

Damn, you were SERIOUS.

You gonna tell the good people of blogland *why* you're selling this?

Yeah. I'm selling it so I can buy Breda a Cobra Patriot for her birthday! :)

That bit where she called you a woman on VC must have pissed you off more than you let on!

Yup Weer'd. I'm one of those angry, violent, misogynistic teabaggers ready to enact my revenge!

FYI - I found an interesting article on the Cobra Patriot that I'll post when I do my writeup on em.

Seriously though, I am selling the P228, so if you know of anyone who's interested...

I'll buy it...just you'll need to hold onto it until my Dogg Alan Gura cleans up Massachusetts from all those dumbshit laws that would make it impossible for me to take possession of said gun and magazines....

I was late to the P6 party. After having bought and fired one I can see why the 228 can go. The P6s are that good.