By a Cobra...... A Cobra Arms Patriot that is.
I had a post partially written up about this terrible little gun, but Weer'd beat me to it.

Honesty, I pulled the trigger on the Patriot twice and didn't want to do it again. To say it was the worst trigger I've ever pulled would be a massive understatement. It was almost like Cobra Arms specifically designed this gun so that you'd never actually shoot it.

If Cobra set out to create the worst trigger ever, then I'd say the Patriot is a smashing success. 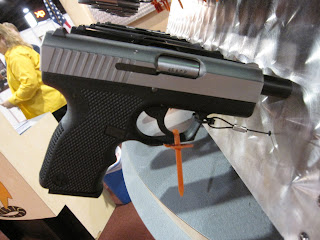 The truly sad thing about this gun is that it costs about $30 more than what I paid for my 2nd Sig P6. That P6 has gone several thousand rounds now with no problems whatsoever. Which one would you rather buy?

There is absolutely NO reason anyone has to buy cheap, potmetal firearms with horrendous triggers. Hell, you can buy the Bersa Thunder .380 that Breda carries for roughly the same price as a Cobra.
Posted by Mike W. at 9:23 PM

Yeah I tried to justify the existance of the Patriot line in my blog, but lets face it, with the used market for damn good guns that can go thousands upon thousands of rounds in a normal service life you really need to be backed into a corner for these guns to be worth-your-while for the price point.

Well the problem is, there are so many new shooters that don't have a clue, and buy them because of the price point, and it ends up being an expensive lesson