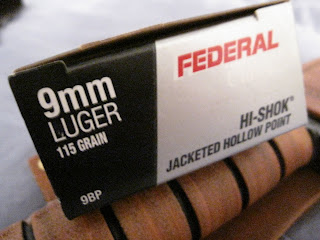 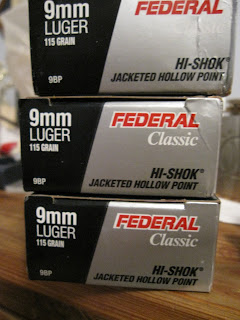 I have a 30+ year old Sig P6 and since these guns are known for having feed issues with JHP's I've amassed a good stockpile of Federal 9BP carry ammo. Federal 9BP has a long, excellent history in law enforcement use and is known for superb accuracy.

Sure, there are better 9mm carry loads available these days (HST's & Gold Dots in particular) but I wouldn't feel the least bit undergunned carrying two mags full of 9BP. One other advantage of the Federal load is price. They can generally be had for ~$20 per 50rd. box.

In comparing some of my newer 9BP boxes with a few 20rd. C9BP boxes I still have lying around I've noticed that the hollowpoint is different. My understanding is that the rounds are identical and that the "C" denotes a commercial designation for the 20 rd. boxes. However, the hollowpoint shape and construction are obviously different. 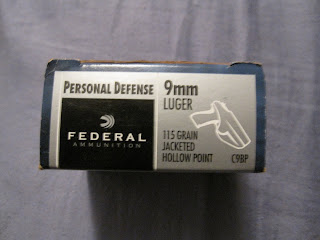 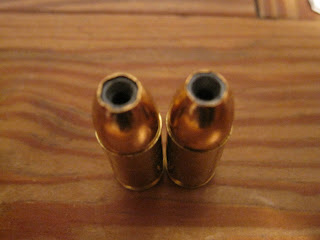 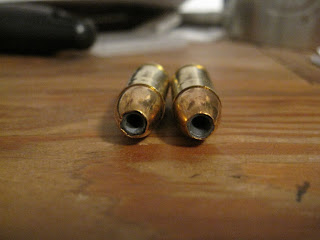 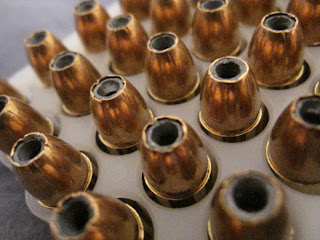 Anyone know if Federal tweaked the 9BP load at some point or if there's a significant difference between the commercial and law enforcement 9BP loads?
Posted by Mike W. at 8:33 PM

Rats! Now I know that 9BP is available. Thanks a lot.

OK, not so funny, but your are correct, that is a very good round.

I too have an old P6 that was finicky about feeding. For not much money or trouble customized creationz fixed the feed ramp so that FMJ, Winchester Ranger 127 +P+ and even ancient 115 gr Silvertip and 147 gr Olin Super Match functioned just fine. I'm all out of the last two, though.

It's your blog, so edit as you see fit if needed. Thanks.

"Sure, there are better 9mm carry loads available these days (HST's & Gold Dots in particular) but I wouldn't feel the least bit undergunned carrying two mags full of 9BP."

Yup, let's face it even WWB or Fiochi hollow-points are going to likely perform just as well as the high-tech variants, when you think about the VERY chaotic science of terminal ballistics.

The big reason why I make it a strong point to carry Federal HST 230 gr +P .45 ACP loads is just for my own personal confidence more than any real-world advantage.

Hell with a .45 I'll just as likely get results from ball ammo, but hey I can afford some spendy ammo to use just for carry, so why not buy it if I feel a little better for having a +P loading using bonded laser-etched hollow-points?

dmurray - I had CCR fix the feedramp on my old P6 when I had it refinished. It seems to feed newer stuff OK now but I like to keep the old 9BP & 9BPLE in it just in case.

It's not a primary defensive gun for me anyway. I have a newer, lower round count P6 I usually carry. Weer'd saw my newer P6 in Charlotte.

I also like to keep the 9BP on hand & stockpiled, since it's likely to feed well in pretty much any 9mm handgun. This goes for the Silvertips you mentioned as well, but they're significantly more expensive.

Weer'd - I'd take the 9BP / 9BPLE over WWB, Fiocchi etc. simply because it's got a long & well proven track record in actual shootings. It's also still used by some LEO's.