For my birthday my sister and her boyfriend were cool enough to track down some Bitches Brew, a brand new offering from Dogfish Head Brewery. Unfortunately there was so much good beer that I never got around to drinking the Bitches. Then, as I am wont to do, I left it at the beach.
I am so proud of my little sis. A few years ago she hated beer. Then her current boyfriend brought her to the Dogfish Brewery down in Milton for a free tour and tasting and she's turned into a beer connoisseur. Hell she owns sniffer glasses, a couple Dogfish T-shirts, and has probably tried almost everything they make. I'm an amateur by comparison, and yet no one would peg someone like my sis as a serious beer drinker.
As for the weekend, there was plenty of relaxing on the beach in beautiful weather, drinking, swimming and one happy chocolate lab. A fun but underwhelming night out in Dewey. (man, I am too old for this, also, Corona & Bud Select were the best beers at the bar? really?)
I'm getting to the point now where I'm much happier staying in a good part of the time with good company, good beer & maybe some rusty nails.
It was definitely a Dogfish weekend. When you're down in slower lower what else would you drink? Coors Light? I absolutely must get my hands on some more Burton Baton. It's an oak-aged IPA which packs a punch at 10% ABV. Amazing stuff that's supremely drinkable given the high alcohol content. I wish it were one of their year-round offerings.
Also, I hear this other guy had a birthday Monday as well and almost lost his iPhone in a lake. That would have been a tragedy of epic proportions. 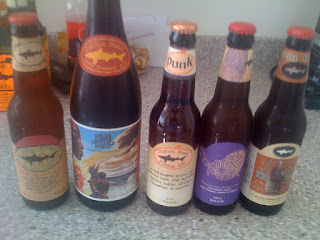 From left to right, 90 Minute IPA, Bitches Brew, Punkin' Ale, Midas Touch, Burton Baton. What other Dogfish Head brews do I need to track down? I hate the 60 minute IPA, though it seems to be immensely popular. I think that's what Breda & Jay were drinking in Charlotte at the shin-dig.

Oh, they also have a limited availability brew called "Life & Limb" Breda, you absolutely must try this! It sounds sweet!