As much as I love the exhibit hall, fondling the guns and drooling over the many things I either can't afford or am not allowed to own, the highlight of the NRA Convention for me is always socializing with the gang of characters who show up.

picked these three photos at random, but I think they give you a brief taste of the weekend shenanigans. You'll notice I posted a good picture of Breda. That's because I think her death stare could kill me all the Wai from Ohio if another picture of her booty ended up on the internet.

Jay G. doing a bit of underwear modeling for Breda. Avert your eyes children. Hey Jay, think you can get them to send you a few free pairs for product reviews? 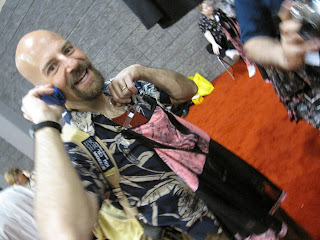 Alan is overwhelmed by the pure awesomeness that is Dirty Harry's Model 29 in .44 Magnum. The excitement is beaming from his face! 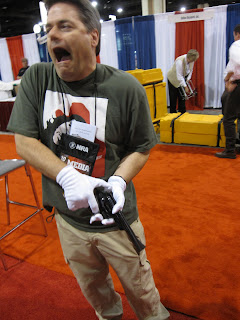 Breda is a walking advertisement for Bersa and their temporary booth babe. The only thing she's missing is a Bersa Thunder with pink Marscal grips that would ordinarily be riding on her hip. Thank you Charlotte!... That said, she's still the world's most dangerous librarian, even when disarmed. 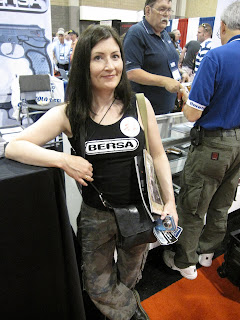 OMG that Alan picture is AWESOME!

I think we all felt that way holding that amazing piece!