There were protesters outside of the Convention Center Saturday afternoon. I'm not quite sure what they were protesting. Perhaps it was all the gun violence brought upon Charlotte by 80,000 (thanks Danielle) or so violent, angry, racist, redneck teabaggers......... oh wait. 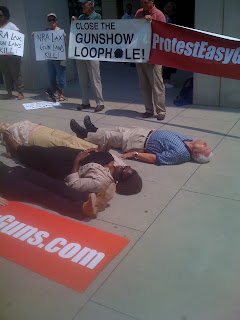 I thought about asking the two guys with the "Close The Gunshow Loophole" sign what exactly they wanted closed, but I figured that'd be an exercise in futility. Most of these folks don't have the slightest clue what the laws actually are. Their protesting is purely emotional. One of the men involved in the protest was there because a family member had been killed. I honestly felt bad for the guy. 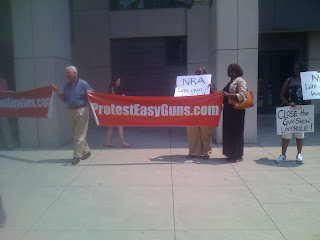 The irony is that that these folks were protesting outside of a "gun free" convention center. I don't agree with the NRA's decision to hold the convention somewhere that disallows carry, but I do understand it from a pragmatic standpoint. Hopefully the NRA can use this convention as leverage to push legislative changes to North Carolina's carry laws, as they were able to do following last years convention in Phoenix.

And here we have the world's most dangerous librarian decked out in her best gunnie apparel with the protesters in the background. 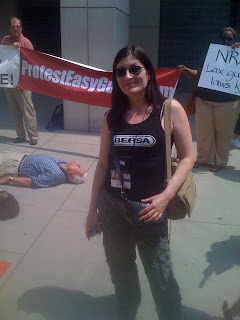 Wow, that is a truly pathetic protest.

How about "Protest easy sentences"?

"Enforce the zillion gun laws we already have"