"Those who would give up essential liberty to purchase a little temporary safety deserve neither liberty nor safety."
-Benjamin Franklin 1759
There are times where I feel ashamed of what America, "land of the free" has become.  This weekend was one of those times. It was also a very happy time, as my baby sister graduated with a civil engineering degree and a GPA above 3.0 (she's the smart one of the bunch)
I attended my sisters graduation from U of D.  I'm a Delaware grad, and this was my third time being there for a graduation ceremony.  This is the first time I've ever been in the football stadium and been subjected to metal detectors and the standard TSA security theater degradation.
Now, I suspect the added security was due to Veep "buy a shotgun" Biden being the commencement speaker. Still, I don't believe everyone's Constitutional rights disappear the moment they get near an "important person". Delaware is a small state. I lawfully OC. If I was out at lunch and Biden walked in would I be disarmed or forced to leave simply because he entered an establishment where I was eating? Sadly I suspect the answer would be yes.
Anyway, when i walked up to the stadium at 7:30 AM They had two rope lines and a TSA setup to get in. They didn't have the new pervoscan machines, but even absent those the TSA is never decent to deal with. Yes. the TSA was running security at the football stadium of a public university that happens to be my alma mater.
I realized when I got up there that I'd forgotten to remove my 2 inch SOG Twitch from my keychain. I also had another small folder in my back pocket, as I'd had to quickly change pants that morning and threw on khakis I'd worn the day before. Naturally I still had my EDC knives on them (both Delaware legal) & never gave it a 2nd thought at 6:30 AM on a Saturday morning. 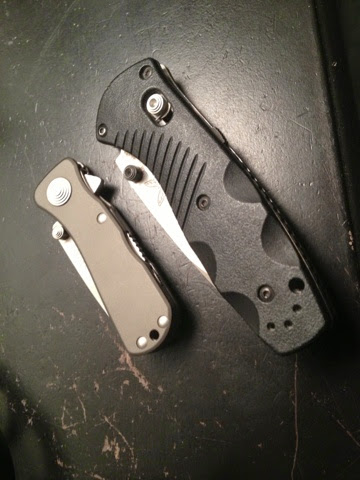 My first attempt was simple. I went up, emptied all my pockets and was told I couldn't enter with these. It's silly & utterly ridiculous.  I'm a 150 lb guy with CP w/ a small pocketknife and no malicious intent whatsoever, but I hiked back to my car, put the sharp things away and re entered at a different checkpoint.
I doubt I'm alone in finding metal detectors and TSA boobs at a college graduation an affront to civil liberties.  I'd also never seen TSA outside an airport so while in line a 2nd time, i turned, turned my iPhone sideways and snapped a photo of the checkpoint.  I was obvious about it as this isn't illegal and I saw no reason to do so surreptitiously. Immediately a TSA agent yelled "No Pictures! That guy just took a picture!"
I emptied my pockets and all 3 agents started calling me out. One even examined my Mazda flip key like it was some uber dangerous device, flipped all through my wallet etc. they asked the USSS if they should make me delete the photo and were answered in the negative
I stepped through the metal detector cleanly and was immediately met by a Female USSS agent blocking my way. She of course interrogated me as to why I took the photo and what I planned to do with it.  not mentioning the 4th amendment or blue gloved thugs i responded with the safer truth, which was that I was a grad myself, had never seen TSA at a college and found it "interesting". No need to mention that it's interesting in a "I want my free country back" way.  at no time was I even slightly rude, loud or discourteous.
The fact that those violating rights never want to be on camera is always telling.
What I find sad is how many people consider this acceptable. They were conditioned to accept it at airports and now the TSA has spread elsewhere. Many people would chastise me for committing the sin of taking a photo instead of keeping my head down. I went to this school. I should damn well be able to take a photo in front of the Blue Hen's stadium on graduation day.
Honestly, had I not been hassled and interrogated for having the gall to take a photo as a free citizen, I would have just kept the photo.  That said, this is America not the damn Soviet Union, so now I think I'll post it. 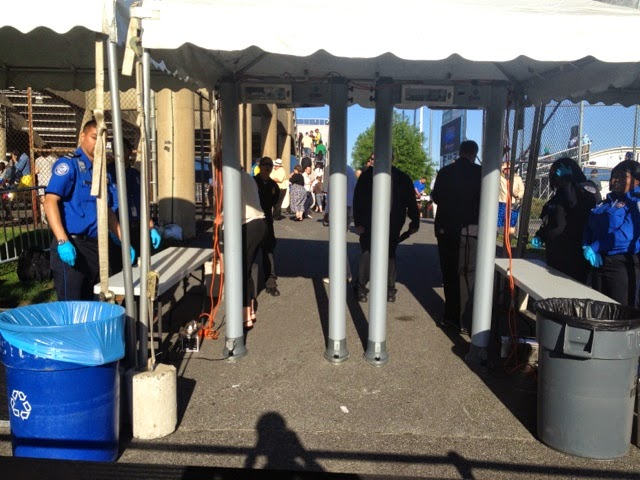 RUH-ROW. You posted it. Now the terrorists can use it as a recon photo and learn all about the TSA methods and tactics at stadiums.

You have just put us all at risk.

... well... not me, since I don't ever go to stadiums and hang out with VPOTUS, but everyone else is in danger.